September 26, 2011
Well, first I have to say I had an awesome weekend all around! My boyfriend Jason and I left on Friday afternoon and drove down to Ashburn for the ArtBLISS weekend. On our way, we stopped in Luckett's and bought a few cool things at that quirky store on the corner! We had a great lunch with a couple beers thrown in! We went to the Meet-and-Greet and had a great time there too! I finally met in person my bud Jenn Judd Velasquez! I also met Elizabeth Auld, who is amazingly nice! I saw too many people to mention, but a few were Lori Anderson, Kerry Bogert, Anne Savage, Melissa Meman, Sally Russick, Laura Twiford, Dawn Gallop, Jenny Davies-Reazor, and many others, and of course, Jeanette Ryan and Cindy Wimmer! It was really great and I highly encourage you to go next year if you possibly can! If you have any class ideas, Jeanette and Cindy would love to hear about them! Now, on to the eye candy!

The first class I took on Saturday morning was with Deryn Mentock - it was called Balance Bronze Bangles. We learned many things, but for me some was new because I an not a wire-worker - I'm trying to get there! I learned how to make these bangles and the point is to balance them by adding charms on the opposite side of your focal piece so you can see your jewelry as you wear it. I did not bring many beads because I had no idea what I was going to do, so I was a bit limited. However, I do like my first creation, and the photo on the bottom left of this mosaic shows my second piece in it's beginning stages - I need to add the dangles to balance the piece out. This piece will have a lot of meaning to me as I purchased the heart bead in Venice a very long time ago and was just waiting for something to use it in! 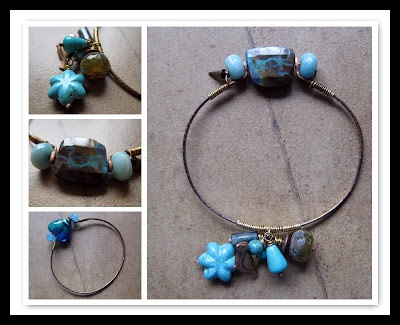 I also have to say that my seatmate was Jen Judd Velasquez and that woman is just a blast! I am so glad I know her - she is wonderfully funny and generous! Plus, we went to a Vietnamese pho restaurant for dinner and she introduced me to my new obsession - I had never been to a pho restaurant before so I am now going to have to seek them out!

My second class, on Saturday night, was with Diane Cook and it was called Heart Strings. It was a lovely class and I had a lot of fun just sitting and being able to figure things out with no distractions of kids or life or phone...you know! And, she told me my little book turned out PERFECT! High praise from Diane! She's such a lovely person! This little book has a lot of meaning to me - my little quote is a message to my sweetie Jason! 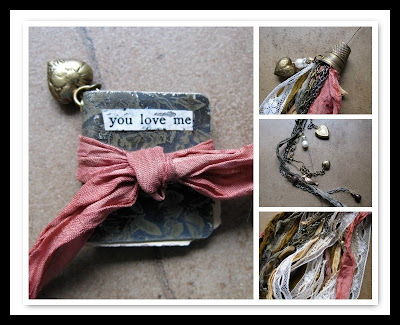 My third and last class, on Sunday morning, was with Christine Damm and it was called Whimsical Blooms. I have to start out by saying that Christine is so enthusiastic about her work, it really rubs off on you! I had a blast - I had never worked with polymer clay before but had wanted to. I felt like a kid playing with textures and colors and clay! It was a blast. This piece is not drilled yet, but each section of the piece has lots of meaning to me! The first section was textured with a sea urchin that I found in the Cayman Islands, one of my favorite places! the second section was textured with one of my glass tools by Karen Leonardo. The third section was textured by a bead. Each and every piece has a part of my life in it, which is why I love it so much! 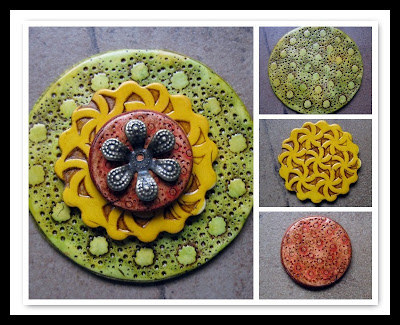 At the end of the night on Saturday, two of us had trunk shows in our room. Jenny Davies-Reazor was selling her gorgeous ceramic components and this is what I bought. I am also grateful to everyone who purchased beads from me - I am having having a very tough time financially this year and it really helped me out! More about that later, maybe! 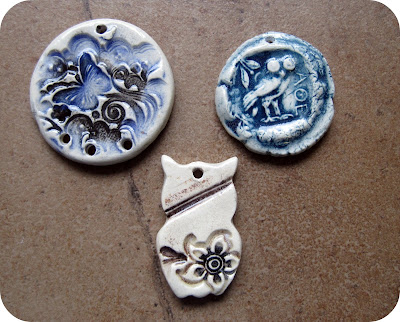 In addition to all this craziness, we had a charm swap during lunch on Saturday. Anne Savage organized the swap and gave us all a very pretty keepsake bracelet to hang our charms on. Elizabeth Auld arranged for pizza to be delivered for lunch so we didn't have to all go out on a search for food! I will show you the charms tomorrow in a new post!

My sweetie Jason and I had a very nice ride home, with another stop in Luckett's and perfect weather! He visited with a college friend on Saturday night in Chesapeake and had a very great time himself!

Thanks for reading this very long post - I hope that my enthusiasm for the weekend has made you feel like you want to attend next year's ArtBLISS!

Cillaw said…
What a great post! You had some great classes and a trunk show. How awesome. I just finished reading The Beauty of Humanity Movement by Camilla Gibb which in large part is about pho soup! How timely. I had never had it either until last Thursday night! Can't wait to see your charm post.
September 26, 2011 at 2:57 PM

Jenny said…
I feel like I am in withdrawal. To have had such a great weekend - reading your post was a nice "fix" and I thank you! Your class projects came out superbly... thanks for your sweet comments about my ceramic charms - my regret is not getting to see your beads in person. Shame on me. I have heard all kinds of talk about Luckett's I may have to make a road trip some day...Glad to have met you!
JDR
September 26, 2011 at 5:44 PM

Shirley said…
Are you kidding? I wanted to go this year! Thank you so much for sharing the excitement with us! I love all the classes you took, and would have taken the same ones. Hopefully, next year.
September 26, 2011 at 7:22 PM

Cindy said…
Sue, I really enjoyed reading about your experience at the ArtBLISS retreat. I'm glad you were able to come from Friday night through Sunday. What a full line-up of classes. I know I would have enjoyed each one you mentioned myself!! Thanks for sharing pictures from each class. I have to say your Whimsical Bloom from Christine's class is incredible! And I agree, her enthusiasm for is truly contagious. :-)
I enjoyed your trunk show too...you brought such an array of beautiful beads, it's always so hard to pick. Luckily you like blue like me...but those purple beads I selected from you are stunning. Thank you for sharing & of course we hope to see you again next year. On Sunday after everyone left, Jeanette and I went out for dinner and started to plan next year's event!...you are so right, we are open to suggestions!
September 26, 2011 at 10:46 PM

Jen Judd said…
It was such a great weekend and meeting you was an absolute highlight!!! We are going to have to meet up for some more wire pounding and torching...the fire will always freak me out a little bit.
Enjoy your week!
Jen
September 27, 2011 at 7:05 AM

Therese's Treasures said…
Wow Sue, it sound like you had a great weekend learning new crafts and meeting and making new friends. I love all of you new creations, but my favorite is the polymer clay pendant.
Therese
September 27, 2011 at 7:54 AM

Laura Twiford said…
Sue it was so great to see you again this year! I enjoyed seeing what you made in your classes as I had all different ones, your finished work is fabulous! Lots of new ideas to take home. I hear everyone talk about Luckett's wish i was closer to go sometime. I love all the beads I bought from you at the trunk show, sorry to hear you are having a difficult year, hope things turn around for us all soon!
September 27, 2011 at 8:32 AM

SummersStudio said…
You had such a good weekend and I enjoyed hearing about it. Next year maybe I will make it up to Art Bliss. It's not all that far for me. I would love to meet you in person.
September 27, 2011 at 8:45 AM

August 17, 2010
Months ago, I took a class at ArtBliss given by Barbara Lewis of Painting with Fire. It involved learning how to make torch-fired enamel beads. I loved it - as you may be able to guess. Barbara did teach us how to fuse items into a flat pendant, but we didn't spend a lot of time on that process, as the day seemed to go so fast! I was making enameled pieces the other night, and due to my own ineptness (remember the big toe burn???) I was able to fuse these two pieces together totally by accident. Now of course, it isn't a usable piece. However, now that I know how to do it, I can see some pieces like this in my future! I can't wait to get more copper cutouts!
7 comments
Read more

February 28, 2019
Cathy Mendola chose Birds of Prey for the theme this month, and it's a pretty awesome theme. You are going to see some amazing work by my team members and the guests who have participated this month! I had plans of doing more than I did, as indicated by the purchases I made for the projects I had in my head. However, I have been doing some work in my house, so whenever time permitted, meaning after work and weekend hours, we were pretty much doing the room renovations. One of them is going to be my study/studio, and I seem to be foiled at every move by trying to get some work tables. So I have only one small project to show you this month.  But first, the purchases!

This first Bali carved owl totem I got from fifirosedesigns on etsy - I wanted to make a mold and make my own cabochon to use in a necklace. However, I really did get around to doing that. So, I purchased the owl heads below.

These owl head cabochons are from ArtisticVariations84 on etsy - they are just fantastic, but …
18 comments
Read more