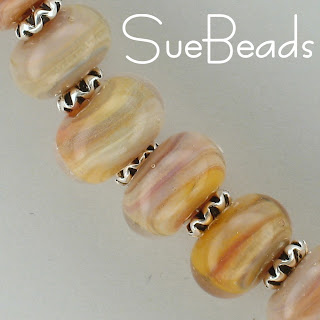 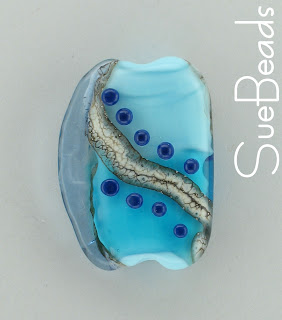 More like two favorite beads - or really, one favorite bead and one favorite set. Anyways... The first picture is a set I made with a glass called Cosmic Storm. It's an Oddly Odd from Vetrofond. On it's own, it is bugly. To me. But I encased it in clear and I really like it. It gets these swirls and earthy colors and maybe that's what a cosmic storm looks like, I don't know. All I know is I love the effect and the colors that come out.

The second bead is my redo of the bead I blogged about earlier - the one that dropped on the concrete. The engineer took this photo, so it was taken inside and of the wrong orientation (I like the ruffle to be on the right side, I guess since I'm right handed. So is he, so I don't know what the deal is, but, whatever.). My son's school has an annual fundraiser called The Great Event - this year, it's at the aquarium at our zoo. I am going to donate a canape knife/appetizer fork set with a slumped recycled wine bottle cheese tray for the on-line auction. The beads will be like this, but without the ruffle so you can actually hold them! Wish me luck!

They are both going in the etsy store right now. I'd get the Cosmic Storm ones, if you really like them - I'll be gone for a week and wont' be able to make any on the beach!

sharon said…
great new beads sue! ironically, the colors in the cosmic storm beads are quite soothing to me.
think of us while your on the beach!!
March 16, 2009 at 11:48 AM

Leslie said…
I agree with the previous post - the colors are very calming, not to mention beautiful. Hope the beach gives you more inspiration!
March 16, 2009 at 2:51 PM